Getting the Internet to Every Corner of My Home 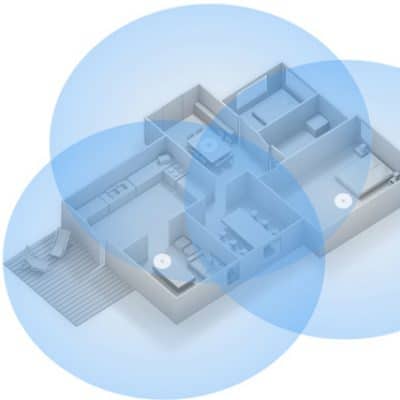 I wish my big ISP would focus on how well the internet worked within my house, not just the link from their data center to my modem. For better or worse, the home network has become a DIY activity for most households. Whether I like it or not, I’ve become the local IT department for my family and visitors.

And how many times have I called my ISP’s un-empowered call center subcontractor who is forced to take me through their diagnostic script. “Sir, can you verify the power cord is attached to your modem.” We’ve all been there. After some DIY trial and error, I’ve now got a smoothly running home network throughout my entire home.

My home router includes both Ethernet wired and Wi-Fi wireless home networking interfaces. Each of my personal devices (laptops, smartphones, video streaming devices, etc.) provide either a wired interface, a wireless interface, or both. As a general rule, I use a wired Ethernet interface if it is appropriate for the device and an Ethernet jack is available nearby. Ethernet supports very high rates, up to 1 Gbps, without risk of interference.

Ethernet is appropriate for devices that don’t move around, such as a video streaming device like Roku or Apple TV, or a Voice over Internet adapter such as Ooma. And you need an Ethernet jack nearby, or to position the device near your home router. In my case, I remodeled a few years back and have Ethernet jacks in most rooms. But I’m assuming that most of us can only make use of a wired connection for a few devices. And even in my case, most of my devices connect to the internet use Wi-Fi.

You can use two free apps that can be downloaded to your smartphone to analyze the Wi-Fi performance within your home. One application is called Speedtest, and the other is CloudCheck.

Speedtest is available from both the speedtest.net website and as a mobile app. Speedtest will show the speed between your end device (laptop, smartphone or video streaming device) and a selected server somewhere in the internet. When using Speedtest, it’s important to pay attention to the speedtest server being used. Speedtest usually does a decent job of choosing the best server (fast and local) that will not limit the test results. But double-check the server if the results don’t make sense.

Cloudcheck is more sophisticated, but only runs on a smartphone or tablet. Cloudcheck will help you separate out the speed capabilities of your home network versus your ISP’s connection from your modem to the internet. Cloudcheck has special software built into some commonly available retail home routers, such as the ASUS RT-AC66 unit, which can help more accurately measure the home networking performance.

Multiple Wireless Routers in One Home

I have an L-shaped one-story home with thick walls, and I use two Wi-Fi routers to get decent Wi-Fi coverage throughout the house. I have Cat6 (Ethernet) networking cable running through most of the house, so I was able to easily connect a second wireless router on the far end of my home.

If you don’t have Ethernet available, things get more complicated. Of all the options, I’ve found powerline home networking to provide the best combination of convenience and performance.

In my case, I used a powerline networking adapter for one corner of my home that didn’t have Ethernet available (and still poor Wi-Fi coverage). The powerline adapters enabled me to “bridge” the wired Ethernet network using our home electrical wiring. I simply plugged in one unit to a power outlet near my Wi-Fi router and connected the adapter to an Ethernet LAN input on the router. And similarly I plugged in another unit in the remote location and connected the powerline adapter to the remote device. A pair of these powerline adapters typically cost between $50 and $100, and the speeds are usually more than adequate (100+ Mbps).

With two wireless home routers and a powerline home networking bridge, I now have wall-to-wall internet access throughout my entire home and patio area. For areas where Ethernet is not available, I prefer the powerline adapters to a Wi-Fi-based repeater. I have found the Wi-Fi repeaters will lose a lot of performance as they introduce extra delay and all of the data must be sent twice, which can create extra Wi-Fi congestion. But more on Wi-Fi later.