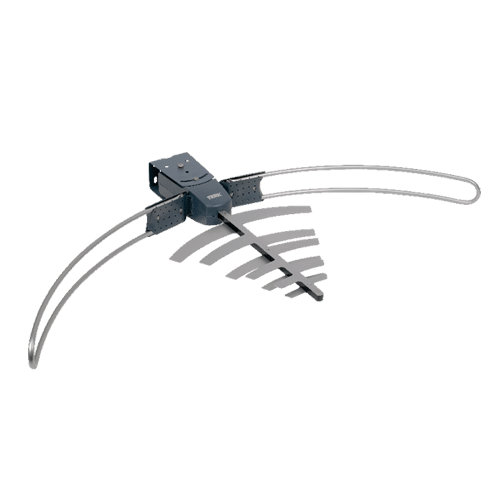 Most of the prime time shows are available through inexpensive streaming services, such as Hulu, but I still sometimes want to watch my local broadcast stations for things like news and live local sports. In most cases, the local feeds are currently unavailable from streaming services.

First, I had to educate (really re-educate) myself about over-the-air (OTA) broadcast TV. I had almost forgotten that my local channels are still available for free over-the-air in crystal clear HD quality, often better quality than cable! And the local over-the-air broadcast signal includes secondary channels that are not even part of the Pay TV package.

I decided to buy my antenna from a local store so I could easily return it if I was not satisfied with the picture quality. I initially tried an indoor antenna as I knew this would be the easiest to install. With the indoor antenna, I was able to get some of the local channels, but I wanted to get all of the major networks (ABC, CBS, NBC, Fox, PBS). If the indoor antenna works at your home, you can skip to Step 3.

Given the indoor antenna didn’t meet my needs, I needed to look into my situation more carefully. Most of the TV signals in the SF Bay Area are broadcast from Sutro Tower in San Francisco (or from nearby San Bruno Mountain), about 30 miles away from my home in Palo Alto, CA. Given my distance from the transmission tower and the local terrain with lots of trees and hills, an outdoor amplified antenna was recommended by the salesperson at my local shop. This choice was confirmed by a website that offers antenna advice by zip code. And given that all of my channels are broadcast from roughly the same location, a directional antenna would provide an extra boost. The directional antenna has the advantage of focusing the antenna gain only in one direction. If you are looking for more technical information about setting up your antenna, this website is helpful.

I liked the looks of the TERK LOGTVO antenna, which costs between $100 and $140, but there are other suitable models in a similar price range.

Before I could watch over-the-air HDTV, I needed to solve a few logistical problems. Where would I mount the antenna? How would I pull a cable into the house? What about my 2nd TV? Fortunately, in my case I was able to reuse hardware and cabling that was already in place, and easily solve all of these problems. If you’ve previously had satellite TV at your house or an old analog TV antenna, you may have similar luck. This realization saved me a significant amount of time.

My new over-the-air HDTV antenna came with a mast, but in my case I was able to reuse the mast that was already in place from the old satellite dish. In my case, the old satellite dish was on the edge of my roof and less than 10 feet above ground level, but it still provided a fairly unobstructed path in the direction of Sutro Tower. The satellite dish mast was a somewhat larger diameter than the mast for my HDTV antenna, but the mounting bracket worked fine. It took a few minutes to remove the old dish, but otherwise not difficult.

Next, I realized that I could reuse the pre-existing coax line from the old satellite dish to connect my TV to the new HDTV antenna without laying any new cable. This was a key breakthrough – no need to pull cable and drill a hole. Even if you have to install a new mast, you may still be able to use a pre-existing coax line from either legacy satellite or cable service, or from an old analog TV antenna.

I went online to find the compass heading from my home to Sutro Tower, the main Broadcast TV Tower in San Francisco. Remember that magnetic north is a little bit different than true north. For the Bay Area, the magnetic north heading is -14 degrees relative to true north. A GPS normally displays true north, while many smartphone compasses and a traditional magnetic compass point to magnetic north.

Most stations in the Bay Area transmit from Sutro Tower, but a few such as KNTV 11 (NBC) transmit from nearby San Bruno Mountain. From Fremont/Warm Springs, Sutro Tower is 290 degrees relative to magnetic north and San Bruno Mountain is 284 degrees. Due to various effects (terrain, buildings, vegetation), your optimum signal may be slightly different from the ideal compass setting. You might want to start around 287 degrees. If you have good signal with this compass heading, you are done. If you can’t find all of the major channels (or have image quality problems), you can search in a range around 287 degrees, say from 270 to 310 degrees.

I went back and forth a couple of times between my TV and the antenna to fine-tune the antenna direction and optimize signal strength for the major channels. Ideally, you can find someone to help you with the tuning process (talking to each other over a cellphone). Each time I adjusted the antenna direction, my partner did a channel scan from the TV menu then wrote down the number of channels found (around 100 in the best case) and checked TV signal strength from the Samsung TV’s diagnostic menu for a few of the weaker channels. In a two-person team, this process might take 15 to 20 minutes. Note that the primary feed for KNTV 11 is available on both channels 11-1 and 11-3. There may be some difference in the signal strength between these two channels, but you really only need one of these two. And KGO 7 (ABC) is also available on Channel 35. Depending on your location, you may receive a stronger signal from Channel 35 than Channel 7.

Next, I realized that I already had a second coax line running through the house going to a 2nd TV. To use this 2nd coax line, I purchased and installed a coax splitter with “passive power pass-through” on one of the jacks. With an amplified antenna, the coax from the TV near the power injector should be connected to the “passive power” input of the splitter. I purchased my splitter for $5.88 on Amazon.

Over-the-air HDTV now looks great at my house on two TV’s! And in my case, this was relatively easy to accomplish. The entire process cost less than $150 and took a few hours of my time on a Saturday afternoon.